The exhibition aims to raise public awareness of shark conservation in Hong Kong and the Greater Pearl River Delta region, and includes work from 34 artists, exploring the worlds of visual art and humanitarian action. The show at the Hong Kong Maritime Museum is the fifth iteration curated by Huang Du. It was previously shown in Monaco, Moscow, Beijing and Singapore to great acclaim.

Parkview Arts Action is founded on the belief that art can play a significant role in initiating societal change. George Wong, Parkview Arts Action Founder and Hong Kong Parkview Group Executive Chairman said, “This is a serious environmental issue that affects us all. Shark preservation is undoubtedly critical. Declining shark numbers pose a fundamental threat to the health of the world’s oceans. Through the artists’ varied interpretations, On Sharks and Humanity can inform and confront audiences in ways that strike more directly into the human psyche than the abstract language of scientific debate.”

Scientists estimate that 275,000 sharks are killed per day for their fins

“Hong Kong Maritime Museum is dedicated to presenting exciting viewpoints on ocean conservation topics. We are proud be co-curating with Parkview Arts Action on this major summer exhibition, providing our visitors an unusual museum experience.  The exhibition will extend to both inside and outside of our Central Pier 8 location, enticing visitors into this important conversation,” comments Richard Wesley, Museum Director of Hong Kong Maritime Museum.

For the Hong Kong edition of the exhibition two acclaimed local talents are showcased for the first time: Peggy Chan and Professor Ho Siu-Kee. Peggy Chan’s work traditionally explores the relationship between the individual, the city and nature.  Her installation and paintings titled The Shore Beyond will therefore present a unique perspective on the relationship between humankind and the oceans. A celebrated figure of both the international and local art scene for over three decades, Professor Ho Siu-Kee’s piece Confessional combines sculpture, performance and photography.

Highlights from the international stage include Chinese artist Zheng Lu’s Tomb of Honour. The stainless-steel sculpture of a gargantuan human heart is comprised of more than 10,000 fishing hooks, presents an alarming metaphor about the cruelty humankind inflicts on sharks. The theme of human greed in relation to the oceans and sharks is continued by Wang Luyan’s mixed media installation, Downward Force on Upward Moving Objects. The visually confronting piece presents a mass of stainless steel buoys at different levels, each one pierced by iron rods.  The piece illustrates the conflicting battle between human greed and desire to be in control. Also not to be missed are Zheng Lu’s Butterfly In Love With The Flower and Li Jiwei’s Forgotten Landscape. The two sculptures are visually very different; the former is a stainless-steel structure of a shark fin and the latter a mixed media installation of a shark’s outline. Equally powerful, they both illustrate the fragility of the species.

There are a number of paintings which present the threat humankind pose to sharks in a unique and impactful way. Artist Liu Zining’s oil painting, Blue, presents a hyper-realistic image of a shark’s eye. Over a metre in diameter, every fleck and shadow can be seen in remarkable detail. The sorrowful look presented in the shark’s gaze encouragers viewers to view the creatures as equals. An equally powerful message is presented in an oil painting by Parkview Group Chairman George Wong’s young grandson Marcus Wong. The painting titled Don’t Kill Me, allows viewers to engage with the subject matter through the eyes of a child, bringing a refreshing perspective to the exhibition. 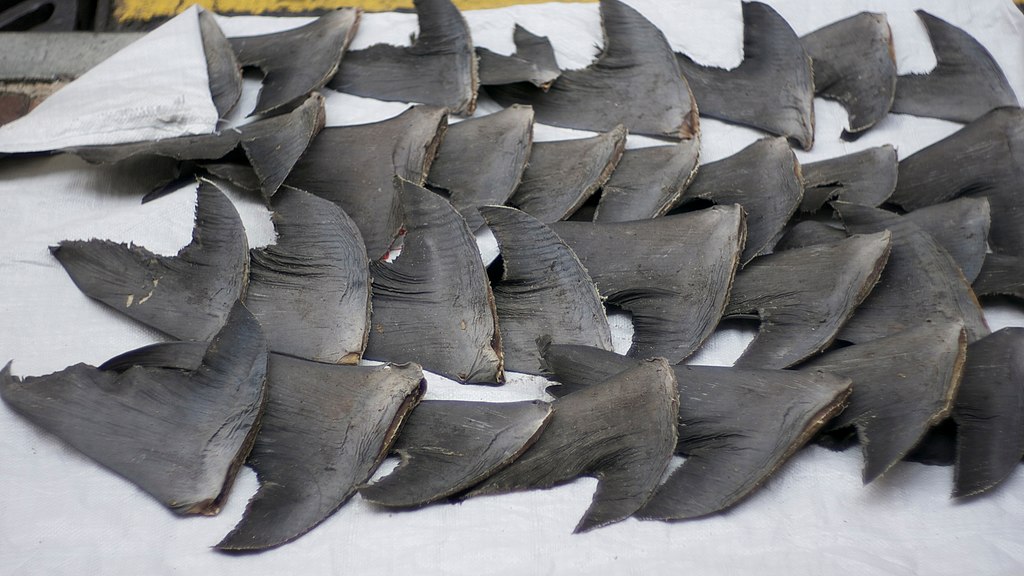 Shark fins drying on the pavement in Hong Kong

"We hope this dramatic exhibition inspires with the beauty of sharks and educates the Hong Kong public about the state of global shark populations," said Peter Knights, CEO of  WildAid. "Overfishing and the cruel and unsustainable shark fin trade that claims up to 73 million sharks annually are driven by consumption right here in Hong Kong. We hope more restaurants will stop serving shark fin soup and more people stop ordering it."

Tickets are now available from Hong Kong Maritime Museum’s website at www.hkmaritimemuseum.org from HKD30 per person.